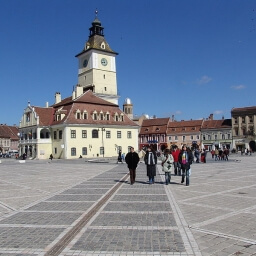 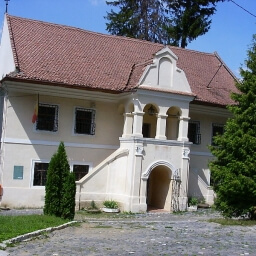 Touristic and Cultural Objectives in Brasov

The Black Church (built between 14th and 15th centuries), is the largest building in gothic style in Romania, having the largest mechanical, still operating, Bucholtz organ in Europe, made up of 3993 pipes, and having no less than 76 de registers. Here, you can listen to classical, as well as preclassical music concerts (The Christmas Concert is notorious in this respect). Here, you can also admire the biggest Anatolian carpet collection in Europe, which dates from the 16th – 18th centuries, fragments of mural painting from the 15th century, a baptismal font dating from 1472, and many other antiques. Right in front of The Church, there is a statue representing the great German classical scholar, Johannes Honterus.
The Old Brasov Citadel – It is a fortified edifice, built up in timber and stone. Recently, it has been transformed into an exquisite restaurant.
The First Romanian School – It houses a section which includes a series of exhibitions from the history of printing (old manuscripts, first editions, the books printed by the Romanian scholar Coresi). In this location, there is the classroom of The First Romanian School in Transylvania. The museum offers the public the opportunity to admire silver covered books, documents dating from the reign of Stephen The Great (Stefan cel Mare), a muniment from 1656, the Tudor Ciortea (music) and Stefan Mironescu (painting) rooms, etc.

The House of Council (Casa Sfatului) – built in the 15th century, it dominates the Old Town Plazza. Today, it hosts the History Museum of Brasov County, having four main sections: archaeology, medieval, modern, and contemporary history.

The St. Bartholomew Church – the oldest architectural monument in Brasov, built in the middle of the 13th century, it features a combined gothic and Roman style. On the Southern façade, there is a solar clock. From 2003, inside the Church, an ethnographic museum has been opened, which comprises over 1500 objects, donated by immigrants, the museum presenting a typical Transylvanian Saxon paysant household, with fabrics, furniture, traditional Transylvanian Saxon costumes, carpentry, bakery, and agricultural tools, etc.

The Museum of Ethnography – The edifice, built in 1902, hosts The Museum of Ethnography containing ethnographic collections and folk art: ceramics, glassware, folk costumes and fabrics, traditionally painted Easter eggs, icons painted on glass, metal, leather, bones, etc. A rich patrimony comprising over 13,600 objects which date from the 17th to 20th century, a landmark for the traditional art in Bran, Barsa, Rupea, and Olt county.

The City Hall Square (Piata Sfatului) is the place where various temporary fairs took place throughout the Middle Ages, and in The Modern Epoch. Due to Brasov`s important commercial role, besides the Transylvanian Saxon and Romanian merchants, the City Hall Square was the place which attracted merchants from The Romanian Principates and from Hungary. The duty for the merchandise was collected at the gate located at the end of Custom House Street (today, Muresenilor Street), from where one could reach directly to the fair.

Rasnov Fortress – one of the best preserved paysan fortresses in Transylvania, was built by the Rasnov inhabitants (probably with the contribution of those residing in Cristian and Vulcan), as a refuge and defense fortress in front of the frequent attacks of the Turks and Tartars in the 13th – 14th centuries. Built by the local paysans, the Citadel does not exhibit an established architectural style, the most important criterion being to make it as hard as possible to conquer. Hence, it was built in stone and brick on a rocky hill nearby the town.

Bran Castle – located at 30 km from Brasov, between the Bucegi and Piatra Craiului Mountains, it is one of the most important national monuments and a landmark for tourism in Romania. This is due to its intrinsic beauty, as well as to the beautiful landscape, and also to the Count Dracula`s legend, whose spirit haunts these ancient places. Nowadays, you can admire various collections of ceramics, furniture, weaponry, and armors; the Village Museum, located right in the courtyard of the castle, invites you into a time travel to take a glimpse of the day-to-day life and households of the paysans in the Rucar-Bran area, and to become acquainted with their traditions and with the important events in their lives.

The Rupea Fortress – located at 30 km from Brasov on the way to Sighisoara, the fortification was built on a basalt rock which is a natural monument. It has a history of over 2000 years; it has passed through various transformations and improvements over the years. The Rupea Fortress was built on the ruins of much older Dacian fortifications. The reason is obvious: its high location on the Cohalmului Hill offers the visitor a wide view, far reaching to the Tarnavelor Plateau which makes it a very strategic location.

The Fagaras Citadel, located in the midway between Brasov and Sibiu, held a dominant strategic position in Southern Transylvania during The Middle Ages. It was built at the end of the 15th century, on the place of an older fortification made of timber and earth. After 1688, the citadel was used by the Austrians exclusively for military purposes, the construction suffering from progressive deterioration. Between 1948 and 1960, the citadel was transformed by the Communist Regime into a political prison. During 1964-1977, it was restored, and partially transformed into a museum.

The Paradisul Acvatic Complex opened its gates on the 23rd of July 2007 in Brasov. Whether in summer or in winter, here, you can benefit, from modern pools, covered or in open air, water slides, as well as football and tennis courts.

Aqua Park is the largest aquatic park in Romania, covering a 4 ha area. It comprises 7 water slides, out of which 3 for rings and one with five tracks, relaxing pool, 4 football courts, a stage for different events, 4 bars, one of them in the water, and a restaurant.

The Adventure Park is a new concept of leisure in open air in Romania, which comprises 100 workshops (games), divided in 8 routes with progressively difficult degrees.
The Adventure Park is addressed to a very large public: families, children from 4 years old, teenagers, adults and corporations (team-building events).

Poiana Brasov is the most famous resort for practicing winter sports in Romania, an important international touristic center and also, a residential district of Brasov City. It features 12 skiing tracks having different degrees of difficulty (one olympic track, three tracks for alpine and giant slalom skiing, one track for special slalom, two for ski jumping, etc.), sport facilities (for tennis, minigolf, handball, basketball), a lake, a cable railway, a ropeway, a ski lift, etc.